Well, we're in the middle of inventory season.  I hate it. My schedule is shot to hell.  Lots of very late nights culminating in next Monday & Tuesday, they will be bad.  I'm in the store for 11 hours on Monday and then back in the store 5 hours later for another 11 hours.  So, how pleasant am I going to be?
There was amusement this past week:
Kim Kardashian posted some nude selfies and while a lot of people looked many, many criticized.  And she got mad.  They pretty much called her a slut...  She is totally clueless.  She doesn't understand that she's turned herself into nothing more then a piece of meat, and more like chipped beef rather then sirloin.  She doesn't realize she really is about as interesting as chipped beef on toast.
Trump had to cancel a rally because all of his little Trumplodites were getting way out of hand; they wanted to riot in Chicago.  This is really funny because for years and years and years Republican pundits, while not advocating violence, have been force feeding hatred down the throats of their base.  Every time Breitbart, or Limbaugh, or Coulter, or Ingram, or even that horses's ass Palin opened their mouths they spewed hatred towards anything not not meeting their standards of conservatism.  They've been shitting in their pants for years and now the stink has finally caught up with them.
And Nancy Reagan died.  Oh, well.  I feel bad for her kids, I'm sure they loved her dearly.  Unfortunately her husband was deified by the GOP because of his landslide victory, and they did so without ever analyzing that victory.  They ignored the fact that his approval rating soared to 97% when he survived an assassination attempt.  And they ignored the fact that nothing went wrong during his first term in office.  He didn't really unify the country.  Lots of people voted for the old fart because they liked him and nothing had gone wrong.  His wife, however, relied upon Mediums to set his schedule and flip-flop of stem cell research when her dear Ronnie was diagnosed with Alzheimer's. 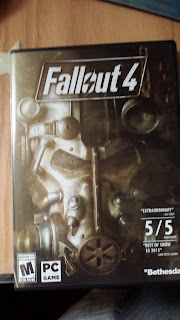 And finally, I did buy and PC version of Fallout 4 so I can mod it.  It was actually cheaper then buy then buying the download version by about $30.  I'm going to give my Xbox One version to a guy I work with who's wanted to buy it but hasn't been able to afford it.  I'm never going to use it again.