Holy Crap!  I have a day off before inventory... and it just so happens to be a Saturday... and... I'll probably end up cleaning.  Fun stuff, you know?
Anyway, I went to see 10 Cloverfield Lane on Thursday evening.  And I liked it, a lot.  The acting is some of the best I've seen in years.  You like these people... well, most of them, so when things go horrifyingly bad it gnaws at you.  John Goodman is outstanding.  You  know, almost from the minute you see him, he's crazy.  But is it good crazy?  Or bad crazy?  Or just bat shit crazy?  When he talks about an invasion by Russians you think he's a little past the squirrely stage, but Martian invaders?  Right.
When Michelle talks about a visit to a hardware store, you're listening to a confession, not an actress.  When Emmett speaks of his fear of failing after getting a scholarship, you know all about his insecurities.  These are are nicely flawed people.  You like them.  But because 10 Cloverfield Lane is a thriller, and a bit of a horror film, things go wrong and then you feel sorry.  This movie does exactly what it's supposed to do... and succeeds really well, which is why, when the Holy Shit moments begin, you sit back in your seat and say "Holy Shit." 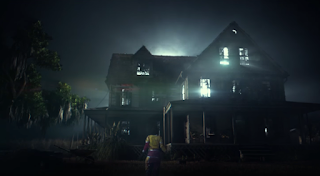 Now I know there are some people out there who are whining about the ending, some say it's silly, some say it doesn't really fit, and I say "look at the title, it's called 10 Cloverfield Lane.  There is a reason Cloverfield is in the title."  For those who are wondering, this isn't really a sequel.  How could it be?  In the original film everybody dies.  However, as I was leaving the theater I said to my friend, "you know, I can see a sequel here, maybe taking place in Houston."