Saturday... ahhhh, the prelude to my long weekend.  Four days, jam packed with chores that needs to be done.  The temps here in Central PA will be in the low to mid 70's (F), if the weather forecasts hold true.  Wednesday, my final day off, we should be having rain... Eta, I believe.

Yesterday the store was busy.  Lots of people were spending money.  Not too many flooring sales, but appliances?  Busy with a capital B.  Since nothing else has been normal this year, our Black Friday has been mutated.  We're now having a Black Friday Event... which has already begun.  This means we are filling our aisles with lost cost, high mark-up merchandise geared for the impulse shopper, buyers who believe the deal is a real steal... when it isn't.    Always remember:  buy cheap... get cheap.  Quality does have cost.

Another thing I will be looking forward to over the next few days is not having to do my daily health check before going to work.  Not that taking my temperature and filling out an online survey is complicated, but doing so is a constant reminder of what's happening out there.  Our heartland is on fire with the virus, as is our nation's administration.  I saw where Mark Meadows is now infected.  And people are beginning to wonder where Mike Pence is.  Evidently he hasn't shown his face in 3 days.  Is he simply lying low while trying to find a life preserver as his boat ride to a future in politics sinks?  Or could there be some other ulterior reason?

Business Insider reported that his aides had to school their leader on vote counting, how stopping the count would guarantee his loss.  Why is it this doesn't surprise me?

Biden is now winning Georgia by over 7,000 votes.  The higher, the better since it eliminates and surprises in their recount.

I don't watch any of Rupert Murdoch's propaganda outlets, but according the The Guardian they are turning on the Idiot Jerk in the White House, telling to accept defeat with grace.  For those who are expecting him to concede, forget it.  That will never happen.   They are telling him his legacy will be that of making the courts conservative.  However, the minute Amy Coney-Cumquat evokes her religious beliefs in a ruling, she becomes a political hack.  In fact, this is the same reason the Supreme Court is going to maintain a very safe distant from the decision making process of this election.

And finally, today is N7 day.  For those who don't know, and there are many of you, N7 is the yearly celebration of one of the most popular, groundbreaking game franchises of all time.  Mass Effect.  You could play the main character, Sheperd, as either male or female, that choice was up to you.  You could make him black, or brown, or white, with tattoos or without, you could make him look which ever way you wanted. And you could have same sex relationships.  Social Conservatives shrieked loudly in anger... to no avail.  The expectation is that today Bioware is going to announce a remastered edition, updated, and with some changes.  The gaming world is... excited.  Here is Commander Shepard. 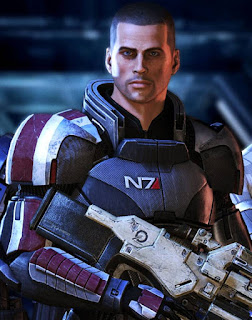