Vote Blue.
Yesterday I did little except laundry since I will not have another day off until Sunday.  Well, I did more than just that.  I baked bread and made beef stew.  Very tasty. 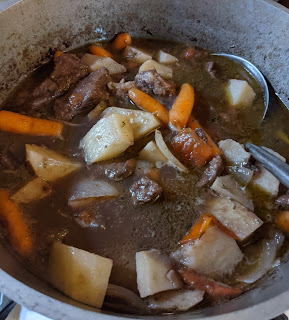 I understand the Idiot Jerk in the White House had some sort of Twitter freak out in the middle of the night, damning the Supreme Court for not giving him his way in Pennsylvania.  In fact, the Supreme Court, which he packed hoping they would bow down to him, has let the states handle their on decisions in regards to voting.  The only times they've side with the Republicans have been when tried skipping a step in the chain of command.
My brother and I traded some texts last evening.  I think it's safe to say that Evangelical Christians are horrified over the prospects of a Biden presidency.  They've spent years building a coalition of like minded supporters in the Republican party in their attempt to dictate the future of the country, only to see the man they believe was sent by God to aid them failing.  They are all praying for a miracle.  If none happens, well, they'll simply rewrite what's happened over the past four years.  Don't worry, in some way or other they're going to blame Bill Clinton if the Idiot Jerk loses.
Vote Blue
Yep, today's the day we hope to take back our government.  Let's do it with a flourish! and a smile!  and a dance.  Here's a little vid I like of some witches dancing in Germany.  They are part of the world's diversity.  And, I have to admit, I have a bit of an alternative reason for posting this.  Should some unwary Conservative what this, I'm sure it will burn out his / her eyes.
Posted by Dave R at 6:57 AM