Oh, my... that WD hard drive of mine that's been slowly dying passed into the nether world of paperweight status yesterday.  This was to be expected.  While I didn't save everything that was on it, what died with it was expendable.  The oldest file I transferred was dated from August, 2008, which means that drive survived for over 12 years.  In hardware terms, that's fairly old.

I did go for a ride in Bavaria yesterday through what appeared to be apple orchards, very nice scenery.  I plan on going for another ride today if I get the time.  My copy of Assassin's Creed, Valhalla will be arriving sometime this afternoon.  Good thing I decided to take a day off, isn't it?  While I can load it into my Xbox, I'm still anticipating the purchase of my Xbox Series X, on which the game will play stupendously.

Oh, and there are some chores I need to do around the house... a couple of loads of laundry.  Sometime this morning I will be priming sections of the upstairs hallway for painting.  Depending upon when the game arrives, I might even begin painting.  There's also a little table I'm working on, trying to make it stylishly chic.

And, of course, the Republicans are steaming angry.  They were the same after the older Bush lost because they believed they were going to run the country forever.  If you look at the election results, the country is divided: half conservative and half liberal.  The best place to meet is in the center.  In fact, we are very Centrist.  Both sides need to work together for the country to succeed.  This was always the way up until Reagan's landslide.  From then on the Conservatives refused to cooperate.  Instead they looked for another Reagan.  When the only thing to show up was a wanna be tinfoil dictator, they jumped on board his train.  The crazier he gets, the worse they look.  While they're sticking with his legal challenges, the undercurrents are rippling with concern that he's beginning to ruin their Brand.  Even Fox News has had enough.  Yesterday they went so far as to cut away from Kelly the Liar's press conference saying her accusations were false and unfounded.  Ouch!

And for those who've never seen this, my gingko has turned to gold. 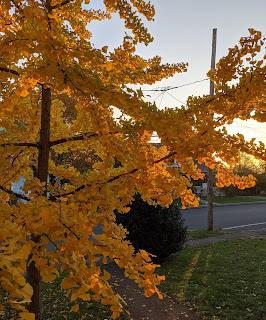