Well, it's Sunday.  A day of rest for some, but for me?  Just because I don't work doesn't mean I haven't a list of chores.  I need to wack so weeds.  I have an old bag of potatoes that's starting to go to seed so I'm thinking of cutting them up and putting them in the ground.  This  fall I could have my very own potato harvest.
I had thought yesterday I might skip the bike ride.... ...  Well, as of last evening I've ridden 66 miles so far this past week.  Since Monday is the start of my week, rather than Sunday, I might end up with... oh, maybe 80 miles.  That would be a record for me.
The Idiot Jerk gave the commencement speech at West Point yesterday.  He spoke a lot about 'unity,' using that word a number of times.  This dumb shit of a man has spent the last three and a half years dividing the country because he stupidly believed his base was a majority group.  Not that he's trying to mend any bridges.  More likely, I suspect, one of his speech writers thought 'unity' sounded nice since his approval rating is heading towards the drainage ditch.
And it looks as if someone else understands Dave's Axiom.  We get this opinion from someone at the NYT... a conservative, no less, who evidently thinks now's a good time to run around wearing a placard shrieking "the end is nigh!"  Don't you find it interesting how "landslide" managed to creep into this opinion?
There was more trouble in Atlanta.  The police once again look bad.  The man had a taser, and he was running away from the police, so they shot him.  The Idiot Jerk's white supremacist / MAGA head base has no problem with this which, is why he will gloss over this situation giving it a superficial mention at best.  To do otherwise would be totally incongruous for this Racist Republican.  He doesn't want to offend his shrinking base.  If he does so, no one is going to vote for him this coming November.
Finally, I thought I give you a shot of my cucumbers. 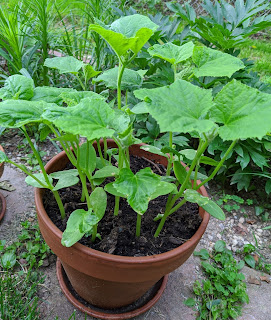 I started growing these babies from seeds.  Let's hope I get some fruit... or vegetable.  What is a cucumber exactly?  A fruit or a vegetable?  Or something else?
Posted by Dave R at 6:39 AM