Taking it home to Granny

It's Monday morning and I get to go to work and wear a mask... face mask, that is.  Mine is a tubular piece of synthetic fabric, a lot like a baggy nylon stocking.  We are supposed to wear them up over our mouth and nose constantly.  That's not going to happen, not until I get used to wearing it.  An amusing side note: I can pull it up over my entire head.  I have no idea what I look like, but people laugh when I do it, so maybe I'll bring it along home this afternoon and take a picture.
There were no protesters yesterday, and the day turned out to be nice and sunny.  The line to get into the store was fairly long.  I am impressed by the patience of people in this time of crisis.  I need to amend that to say most people.  There is that minority group out there who hate being told what they can and cannot do.  Isn't it interesting they, themselves, want dictate to us what we can and cannot do.   Hhhmm.  Many of them don't understand what's going on.  They don't care about anything but their own selfish wants.  In America, this is the new definition of Conservatism.
On a lighter side, I rode 64.9 miles last week.  Five days in a row I was on the bicycle, three of them in San Remo (through the magic of Tacx).  Yesterday, however, I was in France riding stage 2 of Liege-Bastogene-Liege.  One of the hills has a 17% grade.  Interestingly enough, it was filmed on race day so I was riding with actual cycling teams.  Let me tell you, the feeling was rather surreal seeing the Lotto cyclists riding towards me.
There's supposed to be a big protest in Harrisburg today, which is in Dauphin County... which has a fairly high infection rate.  15% of those tested have been positive.  Ouch.  Governor Wolf said "if they want to come and protest, let them come and protest."  Of course, they might end up taking something back home to Granny, but that's okay.
And now even that idiot Pence is saying the "cure might be worse then the disease," which is his way of justifying the loss of life.  He's always been a failed human.
Finally, I took another picture of my tulips, this through one of my rose bushes.  For those interested, I've marked Glen.  He.... she.... It seems to be doing find.  I suspect that might change as he becomes conflicted over his... her... It's inability to bloom. 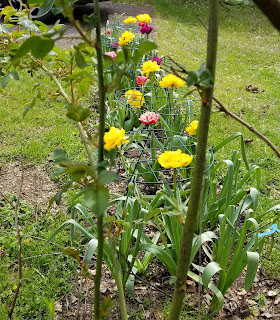