Well, golly gee wiz... it's Wednesday. Today is a legitimate day off for me.  Today is also April Fools day and because of the inept handling by the Idiot Jerk's administration during the very beginning of this crisis and lot of Americans are going to die.  Son of a bitch.
I baked Italian bread yesterday, a first for me.  Without loaf pans!  Believe me, it is quite tasty.  The bake time give was 20 - 25 minutes, that was wrong, it's closer to 45 minutes.  I will play around with this one.  I did you a different type of yeast, one from Italy. 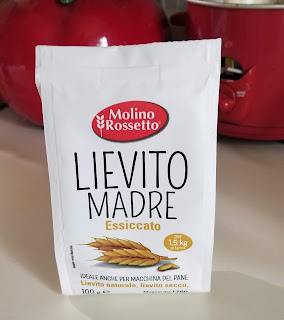 Since I don't speak Italian, I used Google translate, and I had to convert metric to imperial.  All being said, I was very satisfied.
I did another Yoga class yesterday and then rode 13.94 miles in Amsterdam.  The ride is flat, so it's more of an endurance thing than anything else.  I do not doubt I will be doing the same thing today.
And, of course, the Idiot Jerk finally let Birx and Fauci talk about the grim reality approaching us.  We are going to be the country that is most devastated by Covid - 19.  There are those out there who think he's been doing a good job with handling this plague.  That will change as the numbers continue to increase.  Who will suffer most?  The poor.  They have no healthcare, no safety net to fall into.  Where will most of the casualties be?  I do not doubt for a minute it will be the Idiot Jerk's base.  They are the ones who thought Social Distancing was a joke.  They still don't grasp the seriousness of this impending catastrophe.  They are still the ones believing the media is blowing this thing way out of proportion and unfortunately for them, they are old with underlying health issues.  You know who I'm talking about, the ones who came into the store wearing their little MAGA hats.  They will feel the brunt of Covid - 19.  That sounds so odd, doesn't it?  Covid - 19.  So clinical.  I would not be surprised if in a few weeks people start calling it by its real name:  The Trump Death
Perhaps if our government had paid attention to how South Korea, or China were handling this thing we might have spared ourselves the worst.  That ain't going to happen.
I suspect sooner rather than later I will start taking all of that personal and vacation time I have on the books.
Posted by Dave R at 7:40 AM