Przewalski on my ass

Well, it's supposed to be drizzly and rainy on and off today so we'll have to see how business pops in our Garden Center.  While we are still very busy, sales have dropped off a bit there mostly because we don't have the 'mulch pit' open.  The 'mulch pit' routes customers who have bought boupcoup bags of mulch down a drive where associates load the mulch into their vehicles.  If you're thinking those associates are brawny and shirtless young men you're wrong, most of them are middle-aged huffers and puffers.
Did you feel the earth shake yesterday?  It did.  Well, maybe rational people like you and I fail to feel it, but the Idiot Jerk's loyal base did.  The puppets at Fox News took the unprecedented step of warning the MAGA heads not to inject not to inject disinfectant into their veins.  I didn't hear if they also warned that ingesting Lysol could also bring about catastrophic, life threatening results; probably not since most of his base already make their favorite hootch with isopropyl alcohol.
I did watch the clip of Birx reaction to his suggestion of developing a way to project ultra-violet light through the skin and into the lungs.  Fascinating.  We rarely get to see an honest reaction in another human being forced to sit and listen to his egoistic stupidity.   You do know Americans tuned in to last night's briefing just to see him squirm and instead had their prayers answered.  The briefing was short and there was no question and answer session.  What a Blessing.
Not surprisingly, Georgia began opening up their economy yesterday with a dull thud.  No matter how much those white, conservative Americans protest, no matter how often they dance around on state capital steps waving their confederate flags and guns, a vast majority of Americans are concerned about the killer virus known as Covid - 19.  These protesters don't understand most Americans don't want to get sick, they don't want to see Granny die because they needed to have their nails done, or their hair cut, but then Conservatives have always been stupid.
Finally, I bought myself some new cycling shorts.  Nice ones.  A bit pricier that the Baleaf brand I usually buy.  Przewalskis. Very, very nice.  Comfortable.  I wore them yesterday for a ride in Corsica (courtesy of Tacx).  Baleaf has their logo around the waste band.  Not Przewalski.  Their logo is a bit lower, over the left buttock.  See it there, just above the padding. 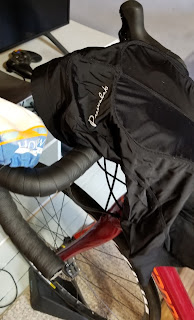 I found it rather amusing to think that whenever I wear them I'm going to have Przewalski on my ass.
Posted by Dave R at 6:33 AM