The Power of Cake!

Yesterday was some sort of appreciation day at work, one of those things in which cake and donuts are brought in to thank us for working well with the team which does our price increases.  Let me make this perfectly clear, I am a walking carb catastrophe.  When there is a spread of cakes and donuts spread out before me I graze.  Of course, this morning when I stepped onto the scale I saw I had gained half a pound.  Damn those maple glazed donuts!  Not that I'm really worried.  Those pounds will be gone soon enough.
I saw a picture of fat Gaetz from Florida yesterday, smiling from ear to ear, and thought 'this guy's a freaking moron.'  You can tell by his jowls he's taken cake grazing to a whole new level.Then I had to laugh.  He believes himself to be one of the best his party has to offer.  He is so out of touch with the real world.
There was an article in Reuters this morning on how the US continues to fail in what they describe as 'soft power.'  What they're talking about is the scale of respect the rest of the world has for us, and it's sinking fast.  We are no longer seen as a world leader but rather a world greeder (I just made up that word, I know because spell check tells me it doesn't exist).  I guess I should say the world's greediest.  This is all because of the Moral Degenerate in the White House.  Selfishly self-interested, that's what people are beginning to think when the United States comes up in conversation.  Where as before we used to freely offer our cake, now we hoard it, sometimes going so far as to steal it from the mouths of immigrant babes.
And just think, in a little over a year we'll be heading for the polls.  When I told my brother that when the Idiot Jerk loses he will relocate to Moscow.  Of  course my brother made a face.  In his mind, that could never happen.  You see, he likes the cake the Idiot Jerk promises.  He craves that cake, moistly delicious so much so, he overlooks the problems, the lies, and makes excuses.  He can't come to terms with the fact that the Idiot Jerk loves only himself, that he will promise anything to his base in order to be re-elected.  When he loses, they will learn how stale and moldy the cakes he was sell really are... and it will be late, because they've already eaten most of them. 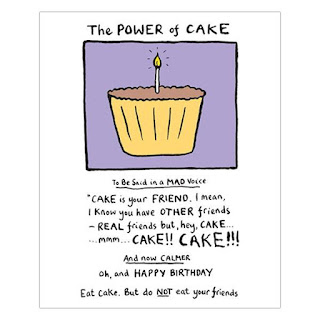