My work week begins today.  Can you tell how excited I am?
Anyway, I have a number of small videos I'm working on - thanks to my GoPro.  There's just one little thing.  For some reason or other their editing software keeps attaching a soundtrack, canned music which has nothing to do with the clip.  I want people to hear what I'm saying - the soundtrack overrides that.  And their help?  It's online, and I keep getting an error message saying "Oops, connection failed."  This is not good.
There's also a bit of an issue with my Tacx software.  During yesterday's ride I got an error message which said "connection lost."  Everything works with Bluetooth.  And I have a Dongle...  a very nice dongle I might add.  I use a Rouvy cycling app rather than the Tacx app, though I do have the Tacx app on my phone, laptop, and PC (I'm a little anal about electronics).  I don't have a dongle for my PC (all I really need is one nice dongle), so that never connects, however I run the app on my phone when I ride.  That's where the disconnect happened.  Instead of registering a 42 minute ride, the app on my phone listed it as 21.09 minutes.  At some point I will send them an email.
Oh, and I ordered the 2020 Warwick Rower's calendar yesterday.  They sell a number of things on their website including an online subscription magazine for only 169 Euros.  Can you hear me laughing? 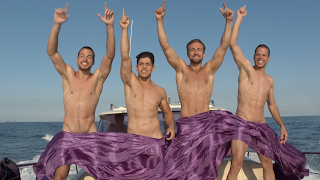 And, of course, the Idiot Jerk in the White House has chosen to... well, get his attorney's involved in this little impeachment party.  This was to be expected.  He's going to refuse to cooperate.  Couldn't his team think of an alternative action rather than one which makes him look inherently guilty?  Gallup did give him some good news yesterday.  Evidently American give him a higher job approval rating than they do a personal approval rating.  Oh, my... his job approval rating is a crazy 40%.  Only 34% of Americans, however, approve of his personal behavior.  Who gives him good ratings?  Republicans and.... Evangelical Christians.  They don't care how bad he makes them look as long as he gives them the power they so desperately crave.  All the while the numbers for those wanting an impeachment inquiry continue to rise.  A majority of Americans want answers... NOW.
Posted by Dave R at 6:45 AM