The first day of my weekend starts today!  Oh, and it's a minor holiday.  Columbus day has been in existence since 1971.  I have no idea why.  I mean, he never set foot on the continental United States.  An Italian by the name of Giovanni Caboto landed in Newfoundland a bit later, which might be a bit north, but is still part of the Continent.  The Brits call Caboto, John Cabot, but he was anything but British.  Ponce de Leon set up the first colony... in Florida... a bit before the Pilgrims set sail.  Surprise, these guys weren't really white.  What Columbus did which is far more important than his discovering Central America is... prove the world was not flat.  You do know that if the Idiot Jerk had been living 500 years ago, he'd have called that 'fake news.'
I have chores galore planned for today.  The weather is supposed to be nice both today and tomorrow.  Wednesday... the day I go back to work, they are forecasting rain.  I have no problem with that.  We've had a very dry summer here in Central Pa.  Not like the the farmers out in Iowa, they've had rain issues.  Of course, like true Republicans and supporters of the Idiot Jerk in the White House, they are blaming the Army Corp of Engineers... not climate change.  No light bulb is going off in their heads regarding that topic.  Nope, instead of scratching their temples and asking "what's with all of the rain,"  they're putting the blame on human beings... because the climate can't change.  The fact that this is beginning to happen in their lifetimes is boggling their little gray cells to the point where the pectin is beginning to break down.  In a few short years they will have mutated into jellyheads.  Oh, wait, that can't happen, that would be evolution.
And yesterday, while I was cleaning up the dog doo in the yard, I saw I had a bloom on my white rose bush. 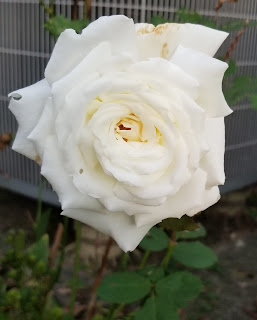 There's a touch of brown around the edge, but that happens.