The temps are supposed to hit 94 (F) again this afternoon... before the thunderstorms arrive.  Something happening this year that didn't happen last?  My grass is beginning to turn brown.  That used to be the normal.  Last year we had rain all summer and I needed to mow my lawn weekly.  Not so this year.  I'm interested to see what next year brings?  Rain or heat... or both.  Climate change might turn Central Pennsylvania in a rain forest.
If anyone is interested, I am not going to see The Lion King.  I have absolutely no desire to sing  CGI hyenas sing.  Animals talking?  meh.  The same thing goes for that Milo Ventimiglia film.  ugh.  That's one of those films designed to manipulate your emotions.  You know going in someone... or something, is going to die.  The next thing on my list will be that Dwayne Johnson and Jason Statham reeling jolt of testosterone flick.  I mean, what's not to like about Dwayne and Jason?
I took my old box spring out to the curb yesterday, with Seig's help, of course.  He thought it was a lot of fun!
I also managed to get in another 10.5 miles in on the bike yesterday.  When I finish, I always wonder where the time went.  I downloaded a ride from Meteora, Greece that's five miles long. 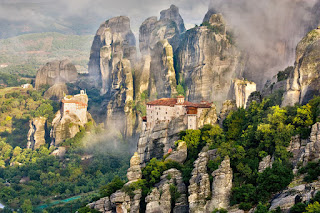 In case you're wondering, Meteora has more to do with meteorology rather than meteors.  This should be interesting.
And I saw the Moral Degenerate in the White House lied about being at Ground Zero.  Evidently this buffoon from Hell doesn't remember... or realize, there a sound bites of him claiming to have been in his apartment watching the attacks on TV.  Remember?  He claimed to have seen videos of Muslims on rooftop cheering.  His lies make America look bad... really bad.  The sooner we vote this scumbag out of office and put him in jail, the sooner we can begin rebuilding.  Those who voted for him don't care.  All they are concerned about is "my taxes," "my money," "my guns," and "my religion."  They are humanity at its worst.
Finally, tonight there are going to be more Democratic debates.  Same thing goes for tomorrow night.  Then, hopefully, we will start to see some of the non-performers begin to realize their main purpose is not to run for president but rather help take control back in the Senate and maintain or grow the Democratic majority in the House.  I suspect that after this evening there will be four leading the pack:  Biden, Warren, Sanders, and Harris.  I know a lot of people love Mayor Pete.  I would rather see him win the Governorship of Indiana and first indict, and then jail Pence for masquerading as a human being.