Back to our Roots

Well it's Sunday.
The Tour de France ends today.  The winner is going to be Egan Bernal.  He is 22 years old.  He is the first Colombian cyclist to win.  This is amazing!  This is the future. 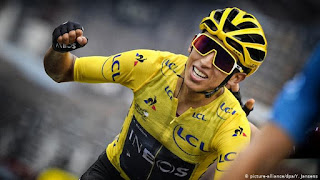 As for me?  I'm going to work again today.
And out in Hell Creek, North Dakota a college student discovered a 65 million year old Triceretops skull.  Dinosaurs... you got to love them.  A long, long time ago, when I was in grade school, we could buy paperback books from a Scholastic Press, and publisher specifically geared towards juvenile literature.  One of the first books I ever purchased from them was something call "The Enormous Egg," about a boy whose chicken lays a very, very large egg that hatches a baby triceratops. 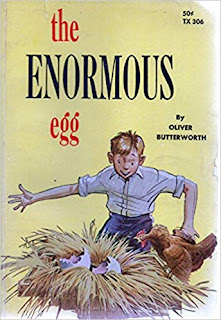 This was my introduction to evolution, in a round about way.  Written in 1956, I doubt very much if Oliver Butterworth had any inclination that eventually we would learn that birds, even chickens, are the descendants of dinosaurs.  Can we talk about scientific foreshadowing here?  Believe me when I tell you I loved that book and read it dozens of times.
Evolution never stops.  Just look at homo sapiens.  We originated in Africa, moved north and experimented with the recessive genes of blue eyes and lighter skin tones.  Genetically speaking, those genes were a dead end and are in the process of being written off.  The dominant genes for dark eyes and dark skin have taken helm of our ship.  Makes sense, doesn't it?  Look at the Greece, for example.  The birthplace of Democracy.  Ain't that amazing!  People with brown skin gave us Democracy... oh, and Geometry...   I guess you could say we're going back to our roots.