Well, it's Saturday morning.  I did 40+ minutes on the elliptical .  I feel good.
Hey, what about Virginia?  Isn't that a shit show?  When this whole thing is over we're going to have a much tighter definition of 'consensual.'  It wouldn't surprise me if guys start carrying around a pre-coital, pre-cunnalingual, and or a pre-felatial form... you know?  Sort of like a pre-nup?  Both parties will need to sign before foreplay can begin.  This will eliminate the "I had too much to drink," and the "I felt coerced," excuses.  Let's be honest here, life for those in any position of power is becoming very toxic, for who are in power, and men are not the only ones being accused.  Fingers are being pointed at both gays and straights; some of the rightly so.  No one is even going to attempt to defend the evil of a Kevin Spacey.  In retail, we have something called 'buyer's remorse,' where someone buys something and then later feels they've made a mistake.  Many times they are simply swept up in the moment.  Time speeds up.  They make a decision they later regret.  I've seen customers buy $4000 in carpet, and when the installers arrive, they claim it's the wrong carpet, or the wrong color, and want their money back.  And, if they raise a big enough stink, guess who gets their money back?  Now, I'm not defending the Brett Kavanaughs out there, the ones who get drunk and fell sexually entitled.  That guy's an asshole.  But there are cases when things happen in the heat of the moment and they seem very spontaneous.  We need to be very careful here, rather than jump on the blame bus because we feel it's the right thing to do.  We must weight the facts from both sides carefully, to do otherwise might send us down the path towards Puritanism.  That would not be a good thing.
And finally, I saw this shot taken by the Chinese as part of their lunar mission.  Stunning, isn't it? 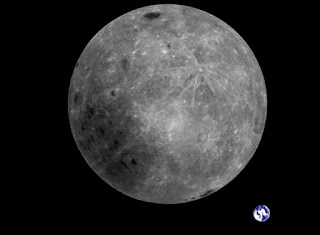 As I looked at this picture, I thought "That should be our lunar mission."  If we don't get off our asses and start doing something, we are going to miss the money shot, and all we'll be doing is looking at other people's pictures.
Posted by Dave R at 6:55 AM