The Alt-Right seethes at a video game

As you know, I like to play video games.  Two were just recently released and I bought them both.  One of them, Wolfenstein 2, The New Colossus is apparently pissing people off.  Well, let me correct myself, that's way too general.  To be more specific, it's pissing off the Alt-Right, Neo-Nazis, and white supremacists, not necessarily in that particular order.  That's right, a video game set in an alternative universe, in a universe in which the Nazi's won WW II, in which the protagonist's main goal is to kill Nazis and destroy their world order, has gotten their dander up.  Wolfenstein 2 is a game about resistance and rebellion, and it's bloody as hell (rate M for Mature for violence).  They don't like that people might have fun killing subversives, especially when those subversives are defined as being Nazis.  They don't want their hate being snuffed out in a shrieking stream of a machine gun fire by a black woman (yep, there's a black woman, and she's a damn good Nazi killer).  Even The Guardian is drawing attention to their outrage, surprised by their outcry.  We all know this wouldn't have happened before the Idiot Jerk in the White House managed to get himself elected.  Here's a review of the game by Rock, Paper, Shotgun. 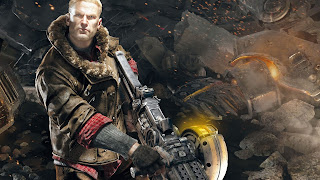 I got a call from Greenfield last evening to tell me they were sending my Mom to the hospital; they thought she might be having a heart attack.  Well, she had nausea... that's it, and now she's in the hospital and they can't find anything wrong.  She's an 84 year old woman with dementia, whose body is slowly falling apart.  I'm convinced Greenfield is much more concerned about their liability than about my Mom's health.  Every 5 - 6 weeks she gets sick and they call 911.  About 20 minutes after her episode starts, it ends, and she's fine.  My brother rushed to the hospital last night just in case, and he sends me a text:  "she's fine and chatty."  So why didn't Greenfield wait before calling the EMT's?  They're worried as hell about getting sued.
Oh, and tomorrow is going to be the day that Mueller announces the first indictment of the Russian Probe.  My money says that the Idiot Jerk in the White House is foaming at the mouth knowing he might have to shit out one of his ass kissing sycophants, let alone acknowledge collusion between his campaign and the Russians... wait a minute... did I say acknowledge?  Boy, am I being silly.