While many think 'auteur' might solely be associated with film, citing a specific film style, the word can also be used with both music and literature, most often being used a little pretentiously and, in this case, may not be totally appropriate.  I mean, Kelly's speech certainly had the hallmarks, he being in total artistic control, however an article in the LA Times hones away some of those specific attributes.  I'll be honest, I was 'stunned' to find out this Four Star General fictionalized an encounter with Florida Congresswoman Wilson simply to attack her credibility.  How embarrassing that this distinguished gentleman tried to sully someone else's character with faulty recollections and phony innuendo in order to prop up the Idiot Jerk in the White House's ignoble attempt at condolences.  But then this was his own, personal foray into enemy territory; his endeavor to give the Idiot Jerk in the White House a smidgen of character failed, and unfortunately he ended up trivializing a moment of heartbreak by lying.  Evidently this is his new style, to foil by distraction and deceit.
Anyway, those on the right swallowed his speech spoon by spoon.  They love this stuff.  His words hearken back to a time they have dearly entrenched in their hearts.  They desperately long to go back to those times, when black people were butlers, or drivers, or maids in uniforms, or sang and danced in honky tonks, and brown people who speak Spanish were either hombres or sidekicks, or only came to town during harvest season.  Gay people either minced quietly in the background, or were over blown comic caricatures on the silver screen where they could be laughed at by people who had no problem with discrimination.  These are the people who love John Kelly's art.  The fact that he embodies a dying culture terrifies them and so they live for his words.  To them he is a success.
On a lighter note, I'm going to go see "Geostorm" this coming Wednesday.  You know, the new Gerard Butler movie?  Somehow, I don't think he's going to be wearing this costume since it's a CGI adventure. 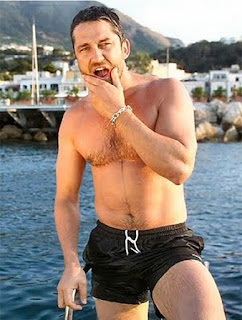 But let's be perfectly honest here, I would rather pay to see Gerard Butler than freely listen to John Kelly's fake art any hour, of any day of the week.  One is honest about crafting his art, the other tries to artfully craft deceit into truth.