So, it's Tuesday morning.  I have about 180 lbs of dogs jumping around on the bed playing with their squeaking, purple squirrel, and from all of the squeaking it sounds like they're having a grand old time.
Last week, when I was down in Lebanon and stopped by the Gingrich Memorial Pool, I picked up a bunch of walnuts.  My first thought was to husk them and eat them when I got home, however, I got to thinking.  Wouldn't it be really neat to take some Lebanon walnuts and plant them here in Enola, forty-three miles away.  They're fast growing trees, producing fruit in  5 - 6 years.  True, in 30 years they can reach a height of 100 feet but let's face, I'm not going to be living here in 30 years.  Out of all the walnuts I brought back, only 2 are viable - but that's all it takes since they are cross-pollinators.  I'm excited!  Sometime tomorrow morning I'm going to plant my nuts. 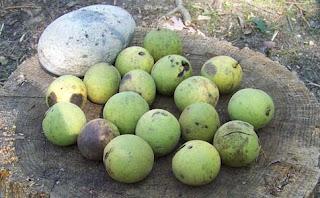 Also, in 3 days Assassin's Creed - Origins gets released.  This game is already garnering some major accolades.  It's still not too late to buy some stock in Ubisoft because this game is going to make a fortune (thinks hundreds of hundreds of millions).  Here's the final release trailer.  I can't even imagine how great it would be to climb up the face of the Sphinx.

And, if you're interested in the "Do Nothing Party's" shitty tax plan, well, evidently there's already heaps and heaps of issues going on behind the scenes, what with the Idiot Jerk saying 401K's aren't going to be touched and the GOP desperately trying to find some small way to keep from diving head first into the Cesspool of Debt.  I'll bet they're terrified that their Kansas failure is going to slap them silly.  Kansas, you ask?  Yepper.  They've already used a conservative spin on that state's failed tax system and things went horribly wrong.  Corporate tax breaks don't create jobs, they merely pad pockets and provide bonuses.  Conservatives are great believers in "do as I say, not as I do."