Today is Monday, and something terrible happened last night in Las Vegas.  A 64 year old, white guy named Stephen Paddock killed more than 50 people; more than 200 were injured.  And authorities are not calling it a terrorist action.  I'm sorry,  but when that many people are murdered it's a terrorist activity.  His main purpose was to kill as many as possible, and create terror and horror.  The Idiot Jerk in the White House sent 'warm condolences,' which confounds me, it's the paradox, you know?  the juxtaposition of warm and condolence.  Warm is nice... condolence sad.  When a friend's daughter gets married, you send warm wishes because you want to convey a 'nice' feeling.  When your friend's daughter dies, you send heart felt condolences, or deepest condolences because you want your friend to know that your heart is hurting.  Warm is fuzzy and nice, not sad.  But then what else would you expect from the Idiot Jerk?
And on the lighter side, my store was broken into late Saturday night by some very physically fit men.  There were at least 3 involved (we have cameras) and 2 were white.  I can't tell you how they gained access because there is an ongoing investigation, however the fact that at least 3 of them were physically fit is without a doubt.  How do I know this?  We have motion detectors.  Every retailer who has anything worth stealing has motion detectors.  Back when I worked for International Paper, in an accounting environment, there were motion detectors.  To avoid being detected by our motion detectors, these 3 physically fit gentlemen military crawled.  They military crawled, from their point of access to where they wanted to go, for over 500 feet.  And that's just one way.  And, when they were detected, which they were, they military crawled all the way back to their entry point.
For those who don't know, this is a military crawl. 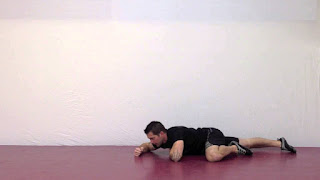 Think of it as a combination plank and crawl.  Their core muscles must be dynamite.  As I said, once they realized they'd been detected, they exited the building the same way.  While I didn't see the videos, I suspect they were moving pretty fricking fast to get out before the police arrived on the scene.
Posted by Dave R at 9:04 AM