Well, my nuts are planted -2 of them, the only viable walnuts that made the journey from Lebanon to Harrisburg.  To find out if they're viable, you need to husk them and drop them in water, if they float... that's bad, there's air inside, if they sink?  that's good.  They have to be planted about 1" -2" deep because... well, that's about as deep as nutsy squirrels bury them in the fall.
I went to see "Geostorm" last evening and... it wasn't that bad.  Not great, mind you, fast paced though a little hokey at times, mostly during the brother scenes between Gerard Butler and Jim Sturgess.  That's right, these 2 guys are supposed to be brothers: 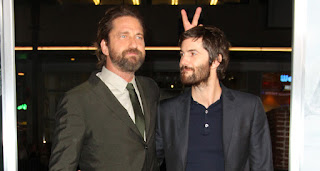 notice the resemblance?   Not in the least.  Marketing was way off for this movie, too.  Every trailer emphasized the CGI weather events, where it's actually a sci-fi thriller with CGI events.  There are good actors here, Ed Harris, Andy Garcia, Mare Winningham... well, maybe not Mare.  And there is pertinence since the Bad Guy spouts off the same bullshit as the Idiot Jerk in the White House which is rather amazing since the movie was ready for release 20 months ago.
And I visited my Mom yesterday; she had one of her incidents while I was there, no strength what so ever.  She was sitting out on the patio and didn't have the strength to get back to her apartment.  It took us about 10 minutes.  An associate offered to call their Med Tech and and told him that wasn't necessary... we've been through this before.  Once she was back in her apartment she laid down on her bed.  I went into her living room and sat down, and we chit chatted back and forth, and then... all of sudden, she zoomed by me in her walker heading towards her favorite chair.   You see, had the Med Tech arrived, she would have checked my Mom's B/P and called 911, and, as has happened before, the EMT's would have arrived to find nothing wrong but would have still transported her to the hospital to be on the safe side.  Believe me, that's gets expensive when it happens every 4 or 5 weeks.
While my Mom was recuperating on her bed, I checked through the news feeds on my phone and saw the Idiot Jerk was giving some sort of impromptu speech in the Rose Garden.  I flicked over to Facebook to see what sort of comments he was getting, and it was so funny.  I don't know what he was saying, but everybody was calling him a "Liar," and I had to laugh.  Rapid fire comments, maybe 2 or 3 per second, from different people and they were all the same.  People were calling him a "Liar," and a "Dirty Liar," and a "Rotten Liar;" no vulgarity, mind you.  One thing is for certain, the Idiot Jerk never looks at the comments on Facebook, otherwise he'd blow a gasket.