Jurassic World - an 'A' ride

I went to see "Jurassic World" last evening and liked it... a lot.  Looking at how much it's making at the box office, quite a few people are really liking this movie, too.  One of the things I found super neat was they way they embraced the original "Jurassic Park" so thoroughly.  I'm sure everybody in that theater has seen the original and there are scenes where the old film and the new film are juxtaposed so perfectly you could feel it in the air.  Think of it as electrically charged nostalgic memories of "I remember that." 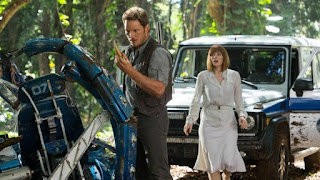 This is not to say it's a perfect movie, it isn't.  There are some... plot holes.  There was a moment when my friend leaned over and asked "where'd that raptor come from?"  Of course I didn't need to answer because the raptor did what raptor's do, and in that finger snap of a moment the story had moved on.
For all those Chris Pratt fans out there, you'll be pleased to know he does an outstanding job of doing what he's supposed to be doing, anchoring this film.  Those times when he isn't on the screen are a bit wobbly, but then he enters the scene and everything stabilizes.  If you haven't seen it, then go see it.  In my book it's an 'A' ride ticket.
Posted by Dave R at 10:50 AM