With the shit that went down in South Carolina I did have to note how the GOP 'wanna be' are reacting to it because I don't think many of the understand this is where they get to act "presidential."  So far Jeb Bush is the only one to have said that damn  confederate flag needs to come down.  The rest of them are being pretty namby pamby   about the whole thing.  Except for Rand Paul, that twit issued a "no comment" statement.  Oops, I don't see him in the White House.  The rest of the bunch are terrified of offending the "southern, white voters."  Speaking of those "southern, white voters," you hear a lot of them defending the confederate flag, claiming it's part of their heritage.  They claim they want to be proud of their ancestors who fought in the Civil War.  They're proud of the fact that their ancestors were pro-slavery and anti-black? 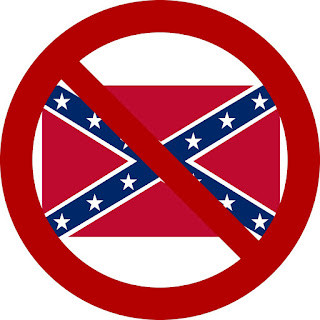 I started searching Southern Heritage and was surprised that in general most websites, except for one, had serious racist overtones.  The one that didn't pretty much smacked down the confederate flag.  Even more interesting are the comments, and there are quite a few.  Most find the flag to be an atrocity.  Those defending the flag?  Well, they're very good at rationalizing their racism.