For those of you who don't know it, tomorrow is Memorial Day here in the United States.  This day was set aside as a National Holiday when we could remember those who have given their lives so we might live free.  This is also the day American Retailers have decided is the first "great holiday' of the summer season.  They want you to remember to go out and buy that expensive new patio set, or that new grill.  Sales abound!  You cannot turn on commercial television without being assaulted by ad campaigns which cost a veritable fortune.  You see this holiday is really all about spending money and nothing else.  Oh, sure, towns and communities will have small parades in which aging veterans will walk or ride down streets, but there will not be throngs of people, they'll all be out trying to get the best possible deal.  The small community in which I live had a parade, but it was last Sunday, May 19.  Hhmp, that makes perfect sense to me, I mean, you don't want to actually have the parade on the designated holiday, it might interfere with some one's barbecue. 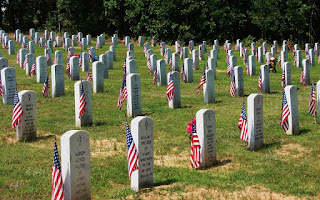 This is not to say I'm against retailers taking advantage of the holiday, I just feel they need to be a little more honest with the American Shopper.  For them it is about making a buck, not about honoring any of those who have given their lives for the United States.  And the American Shopper needs to understand that all those flags being used to decorate sale merchandise are not meant to honor anybody.   They are, however, meant to grab your eye.  Admit it, they are catchy to look at.  People need to understand that in this case, however, they're being used to tease you in to spending your money, into adding to the balance of your credit card, and for giant retailers that is their only purpose.
Posted by Dave R at 10:49 AM