So, how much do you weigh?  Or should I ask how big of a pig have you been?  Or better yet, is this the family picture you keep hiding from all of your friends? 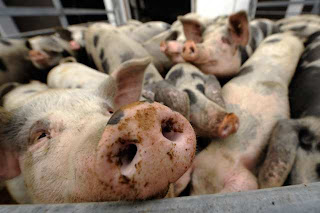 I can ask that because I’ve been there, eating two or three donuts instead of just one, and going back for seconds not because I was still hungry, but just because the food was there.  If you’re a male who is  5’ 9” and weighs 185 you are fat!  Depending upon your build, you poundage could be 10% to 20% higher then what it should be.  There is no nice way to say it.  Why sugar coat it.  Oh, but people do like to lie to themselves.  They’re just a little chubby (emphasis on the word little), or a teeny bit overweight (teeny bit my ass).  This juxtaposition of small modifying large is just another form of denial.  Way back when I was going to LVC I had an English professor who described himself as ‘portly.’  He liked to eat and threw dinner parties where both faculty and student supped on the most delicious foods.  He could, however, not permit himself to acknowledge that he was fat.  Portly sounds so much better then fat.  Once you’ve finally admitted to yourself that you are not a little overweight, but are instead fat, you can start doing something about it.  First thing you want to do is notate you exact weight.  If you have a digital scale, like I do, and it gives  your weight as 198.2 don’t round it down to 198, because that’s a cheat.  Cheaters are just as bad as liars. Next up, another measurement you can use for torturing yourself.