Okay, let’s move on two step three; one was weighing yourself, two was coming to terms with the fact that you’re a fatso, and three is grabbing the tape measure.  Most women own at least one, most guys don’t and if they do it’s a DeWalt, a Lufkin, or a Stanley, all three of which fail completely, they’re just now flexible enough.  Oh, and while you can pick up one of those tape measures at your local Home Depot, the one you need is can be found in the sewing aisle of your local K-Mart or Walmart. This is what you need. 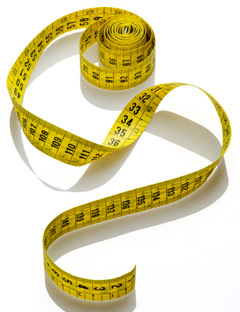 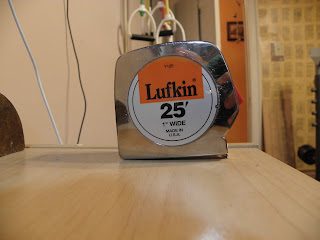 Why do you need a tape measure you ask? Several reasons.  When you tell people you’ve lost 10 pounds you want to be able to tell them where because your body is going to fight you tooth and nail for those pounds of fat.  Those 10 pounds might be in your shoulders, or you arms, or you thighs, anywhere but in that sagging gut of yours.  As far as ‘fat safe havens’ go, your body thinks your gut is the safest, which is why it will be one of the last visible signs of fattage on your body.  What is fattage?  Think of it as acreage but comprised not of land but of fat cells.  Now, on the spread sheet you’re using to track your weight loss, set up 5 columns and label them biceps, chest, gut, hips and thighs.  Every time you climb off the scale and enter your new weight onto your spread sheet you’re also going to measure these 5 areas of your body and include fractions, otherwise it's a cheat!