We are Rockin' the Boat!

My weekend began last evening and, as usual, I and the dogs slept in this morning.  Weather wise, we
re supposed to have showers.  In fact. they're predicted on and off for the next couple of days.  You know what they say, fall showers bring... falling leaves.  Wow, that's not as catchy as I had hoped.
On my agenda for today?  Cleaning the aquarium and adding water.  Oh, and I have to put the dishes in the dishwasher and also do laundry.  Otherwise, I'm going to be painting trim in my hallway.  Can you hear the enthusiasm in my words?
What isn't going to be on the check-list for this morning is a walk with the dogs... rain, you know?  maybe this afternoon.
And the Senate begins hearings on Amy Comey something or other.  I don't know why some people need to used 3 names.   Does sit mean they're complicated?  Or confused?  Are they who they are?  Or really someone else?  Instead of writing her full name all the time, I think I'll just use her initials:  ACB which I suspect resembles the dyslexic alphabet of reality she has running through her head.  Evidently she accidentally on purpose left several virulent anti-abortion articles and events she had participated in, off of her resume.  I suspect she's a lot like Grace.  Who's Grace?  The large spider living on my back porch.  She looks a lot like ACB, doesn't she? 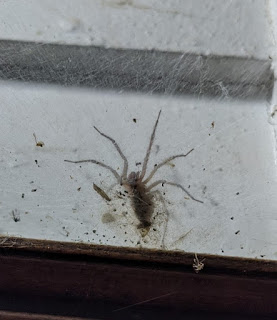 An amusing thing I saw yesterday from Dick Durbin paraphrased.  "Republicans have been packing the courts for years and bragging about it, so I don't see why they should be upset if Democrats do it when they get in power."  What Republicans are really want us to do is to sit down and not rock their boat.  Yeah well, have they go a surprise coming.  Here's a little ditty foreshadowing what's to come.  It's quite catchy... except for Republicans.
Posted by Dave R at 8:59 AM