Today is a day off for me and I didn't sleep in, mostly because the dogs thought 0300 was a good time for a potty break.  I did go back to bed, but found myself thinking about this and that.  I'd doze off, and then wake up, and doze off again.  I probably was sleeping more than I thought, but in the end, around 0430 I roused myself up and started a pot of coffee.  I am off today.  I can take a nap if I feel the need.

While there are some chores scheduled for today, mostly it's going to be spent relaxing, especially since I go back to work tomorrow.  Friday I'm off again... to get my car inspected.  It's new, so there should be no surprising charges.

Of course, the Idiot Jerk in the White House left Walter Reed yesterday... after 3 days.  His treatments are supposed to continue there.  This means that in those 3 days all the necessary medical equipment needed to keep him alive has been installed in a room at the White House.  If you watch the little clip of him standing on the balcony and taking off his mask you'll notice he's having problems breathing.  He takes several deep breaths.  He also breathes through his mouth a lot.  I work with an associate who has emphysema, he breathes through is mouth quite frequently, it gets the air down into his broken lungs faster.

Comparatively speaking, I was reminded of George W standing on the ruins of the World Trade Center.  That photo-op got him re-elected.  The Idiot Jerk's taking off his mask was supposed to show strength in the same way.  Once again, he failed.  He's a failed reality TV star who's desperately looking for a gimmick to regain his audience.  The blowback he's getting shows a vast majority disapproved.  They have come to realize that in Biblical Terms, this man is unclean. 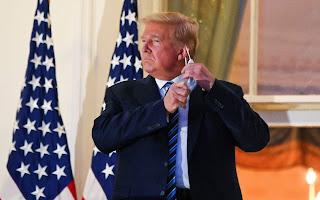 And for those of you who missed it, Justices Alito and Thomas have vocalized support for Kim Davis.  That's right, they want to take away your rights... all of them.  All of you who didn't vote because you thought Hillary had it in the bag?  You are responsible for this.  How do you fix this Cracker Jack Crazy travesty?  Vote Blue.  Get everyone of your friends to Vote Blue.  We need to take them out, take them down, and put them back where they belong.