And so the weekend begins.  As I type this, Biggie is lying on the floor beside me his belly filled with breakfast.  Ah, the life of a dog... or any pet for that matter who's smart enough to twist his owner tightly round his paw.  Very shortly, he will stand up and lumber into the bed which is much more comfy then the floor.

Yesterday was slow at work.  One of my measures for a tile floor installation cancelled.  This was a bit of a relief because the customer was pushing for the job to be done fast.  She's selling her house.  She had bought cheap, clearance tile (probably not enough).  Yesterday she showed up at the flooring desk saying she had found a contractor who was going to do it... today, and I said fine.  Good contractors are booked ahead and you have to wait.  Finding one who doesn't have a waiting list is a good indicator his workmanship is lacking in both reliability and quality.

Oh, and there was another debate last evening.  Didn't watch it.  I did see a few muted clips this morning with subtitles, that's the only way I can take the Idiot Jerk in the White House.  Watching his eyes, however, as they slid from side to side, I could see he was looking for something to grasp onto.  His attacks weren't working.  He spit out some nonsense about Hunter Biden and Joe fired back a salvo using the 'secret Chinese bank account' as ammunition.  Neither Republican nor Democratic strategists see this last encounter as changing the trajectory of the election, especially with 42 - 48 million people having already voted.

And speaking of trajectories, I see that the Republican held Senate is most likely going to confirm Amy Coney Comquate on Monday.  This packing of the Supreme Court was supposed to help ailing campaigns and is instead turning into another Conservative Failure.  Americans want the court to be Centrist, balanced, with justices occasionally swinging to either the left or right. This is something the Republicans will never understand.  They hearts have this desperate craving to dictate and control, which is why they love their Idiot Jerk.  This is just one more stupidity which we're going to have to fix.

Oh, and in case anyone is wondering, Biden is being declared the winner of the final debate... as if that's any surprise.

And now finally, another pic of one of my pink dahlias.  Seeing it up close and in person it's a bit exquisite. 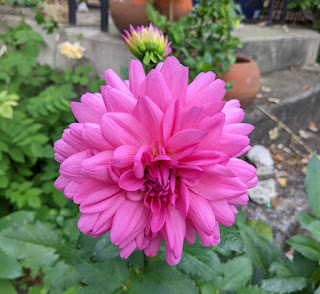