It's an early morning for me.  The father of one of my fellow associates died, so I'm going in to work early.  I suspect they'll want me to do supervisor things since the associate was an aisle manager for the paint and specialty departments.  There's only so much I can do since I'm now just a lowly, hourly specialist.

For those who don't have Twitter, yesterday a lot of gay men pissed of the Proud Boys by showing them how Pride brings out the really Proud Boys. #ProudBoys was trending heavily for a while.  Here's a screen shot to show you what many were seeing.  Can we talk about being armed and dangerous? 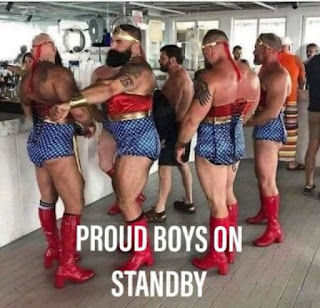 Anyway, I got my storm door hung yesterday before I went into work. I will need to play around with the framing since my house is old with no straight lines and no 90 degree angles.  This is fine.  Lily wasn't too pleased with it at first, but she's fine now.
And how sick is the Idiot Jerk in the White House?  His doctors are giving conflicting information.  Supposedly he's on a steroid used only in very severe cases, yet he's well enough to go for a ride to wave at his mentally ill supporters.  Of course, the glass was tinted, he was wearing a mask, and when I looked at the pictures I couldn't tell if it was the Idiot Jerk or Boris Johnson riding inside that SUV.  For all we know, that might have been a body double.  There's also the possibility the conflicting reports we're getting from both the White House and his Medical Team caused by their inability to stick to one lie. Remember, after failing to kickstart his campaign so many times, his last, most desperate option might be to appeal for the sympathy vote.  There are fools out there who will fell sorry for him without understanding this might just be another form of dirty manipulation.
He does need to do something to counter that abysmal debate.  His approval rating dropped among everyone but his rabid base.  Biden when from being 10 points ahead to 14 points ahead in his race for the White House.  More and more you're hearing people say "enough of the Idiot Jerk."  America is fed up with this dirty reality show.  They want it to end.  The only way to do that is by voting Big and Blue.  The time has come to squash the GOP and take back America... forever.