Wow, it's Sunday!  I slept in a bit since I'm going into work late.  The 'muscles' I'm using to help install my storm door are showing up this morning.  Instead of punching in around 0800, I'll probably hit the time clock around 1100... or maybe 1130.  Since it is... Sunday, this is fine.  The 'after church' crowd doesn't start showing up until noonish, and if the football game hasn't been cancelled because of Covid many of them will stay home to watch men in padded suits tease each other with infection.

Being an employee in what's considered a high risk group (over 65), the great orange retailer I work for gave me a lot of personal time in case I came down with Covid.  Many of the associates who got this 'chunk of time' have frittered it away by using a day here and there.  Not me.  Since we are not allowed to let this sit on the books forever, we were given the option to cash some of it in, which I promptly did.  As a result, around Thanksgiving I'm going to be getting a very, very nice bonus in my check.  The hours I left on the books will need to be used by July.  I don't think I'll have a problem doing that.

I understand the Idiot Jerk Tweeted some sort of video yesterday from Walter Reed in which he claimed his treatments were 'miracles from God.'  Have you ever heard such horseshit in your life?  Whatever happened to science?  You'll notice he didn't mention the men and women who worked diligently behind the scenes to develop remdesivir. 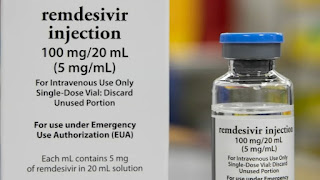 Evidently his doctors must have found a big, big stash in  a cabbage patch.  The last thing he wants to do is mention the word 'science.'  His Cracker Jack Crazy Christian base hate that word.  They would so much prefer relying on snake oil and theologically approved magic than science.
And, of course, there have been conflicting reports regarding his health, mostly I suppose because they can't really decide which tact to take.  Is he knock, knock, knocking on death's door, or is this really nothing more like a bad case of the flu... where he needs to be on oxygen, but only for a little bit of time.  There are times when I suspect he might not even be sick.  I've seen a number of remarks regarding Reagan and how the nation rallied around him.  That's not happening with the Idiot Jerk, though I think that's what they were hoping for.  In fact this might just be another desperate attempt to kick start his failing campaign.  If it is, it's failing miserably.  According to a Reuters / IPSOS poll Biden has moved into a 10 point lead.  Ouch.  This is why the Idiot Jerk is being treated with miracles from God.
Posted by Dave R at 7:27 AM