I drove down to That Fish Place yesterday.  Getting there is... complicated.  The exit to Landisville is completely closed.  This means you need to drive to the next exit and wind your way back.  The GPS in my was constantly resetting.  The same is true when you leave because... the entire section of road leading to the 283 on-ramp is torn up.  Anyway, I bought 6 Green Lantern Mollies and a snail... I have algae.
I have a dickens of a time deciding on what the winter theme was going to be for my tree.  Snowflakes?  Icicles?  Bears?  Wow!!  What a great idea!  All three combined!  I really like the idea of bears. 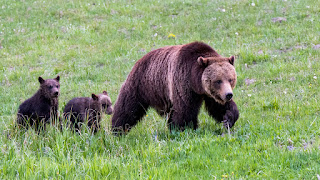 Cute and friendly, as long as you keep your distance.  Up close they can be dangerous.  So I bought one, an ornament, not the real thing.  And then I made a video.
And, of course, we only have 13 days until the actual election.  How many people have already voted is beyond me.  Every media outlet  has a different figure, all of them are high.  Reuters is giving a percentage.  According to them around 30% of the total votes cast in 2016 have already been mailed in, with Democrats leading the charge.  One thing you need to keep in mind.  Those ballots are identified by party affiliation, not by candidate.  There's no way we can tell how many Republicans have voted for Biden.
I understand the Idiot Jerk's campaign is running out of money.  He did say he was going to fund some of his campaign himself.  So far, no indication he's doing that.  Instead, they're cutting ad time in certain states.  That's not a 'win, win' strategy.  At this point, he's betting on taking it to the Supreme Court.  To avoid this the Democratic Victory needs to be overwhelming.  Vote Blue, if you haven't.  If not stand in line, do you part, and save the country!
Posted by Dave R at 7:13 AM