Ah... Friday.  This is kind of my humpy day since I'm in the middle of a 6 day work week.  That's right, today's my third.  The weather's supposed to be cool, drizzly, possibly rainy, so that might keep the shoppers away.  If you are interested in stopping by, our Halloween stuff is flying out the doors.  Markdowns have begun.  Now when a customer walks into the flooring department and asks what's on sale, I can point to the front of the store and say "that big, green, inflatable monster."

I'm a little sore from yesterday's visit to Planet Fitness.  I suspect getting back into shape may take a little longer since I am now a little older.  That's fine.  There's nothing wrong with a little muscular discomfort if muscles maintain their mass.  Maintenance is everything.

Ben Sasse, a Republican from Nebraska up for re-election, apparently trashed the Idiot Jerk in the White House in a phone call to constituents.  This was not simple criticism. Once again, we hear the word 'bloodbath.'

And what about those New York Post stories on Hunter Biden?  Social media is in the process of shutting them down for a number of reasons.  I do believe now their source is being classified as being tampered with by the Russians.  This was, I think, supposed to be another October Surprise.  Instead, Giuliani is being investigated for possibly helping the Russians.  Could a charge of treason be in his future? 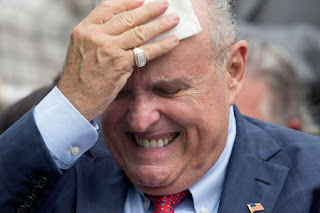 And there was a non-debate last evening.  Dueling Town Halls, is what the media was the event (s).  Evidently Biden talked for long periods of time treating the time with voters as an actual Town Hall, even going over his allotted times spot.  As for the Idiot Jerk?  He was contentious and irritable. One headlines claims he "even forgot to attack Biden."  Ouch!!  He used a throwaway line to say he rather than forcefully deny white supremacy.  Oh, and he couldn't bring himself to denounce QAnon (sp).  You have to remember, this man thrives on the underbelly of conspiracy theories.
Oh, and there are quiet whispers coming from Rupert Murdoch, a billionaire buddy of the Idiot Jerk, who's quietly prophesizing a "landslide victory for Biden."  Notice, he didn't say bloodbath... but in this case, landslide has pretty much the same definition.