I kid you not

While some of you are prepping for the weekend, for me? Today is nothing more than a tease.

Yesterday was kind of... odd at work.  Is it full moon?  Here's an example. (I hope you're sitting down).  A customer called, they were supposed to have flooring delivered yesterday and she was concerned because no one had called her yet.  So I checked.  The delivery date had expired.  And then I looked and saw their quote was still 'staged for register,' so I asked "did you pay for this?"  She replied, "we gave the guy at the register the paper."  Of course I asked, "did you put it on your credit card?"  And she said "no, we're supposed to be set up for monthly payments."  So I told her she needed to put the charge on her credit card, and she asked?  "And they'll send us a bill every month?"  So, I said "yes."  Then I heard her tell her husband, "we were supposed to put this on our credit card, this guy says they'll send us a bill every month."  I kid you not.

None and then I'll see something that just... sticks out, and I think I ought to mention it, like an article in The Guardian.  It seems one of the main reasons McConnell is trying to push through Amy something or other's nomination to the Supreme Court is because he doesn't want to give the media too much time to scrutinize her past because... she is really Cracker Jack Crazy.  This makes sense.

And yesterday the Idiot Jerk in the White House lashed out at... well, a lot of people, in an interview.  Like any tinfoil dictator, he's furious his political opponents haven't been indicted and put in jail. How Putinesque.  Our infamous leader also believes he won his debate with Biden, even though his approval rating dropped 4 points afterwards.  He refused to participate in a 'virtual debate' because they'll mute him so he can't interrupt.  He also claimed his treatment was a cure... it isn't.  Oh, and I guess no one told him that this 'miracle from God' was developed using aborted fetus tissue.  It was also revealed he had the doctors and staff at Walter Reed sign NDA's (non-disclosure agreements) after his secret trip there in 2019.  Oh, and his doctor (?) said he's finished his treatment, so he wants to start live rallies this weekend.  I kid you not, I can not make this shit up.

Finally, a bit of summer still blooms as we enter fall.  Here's a pic of one of my roses, oh, and that's Biggie in the background. 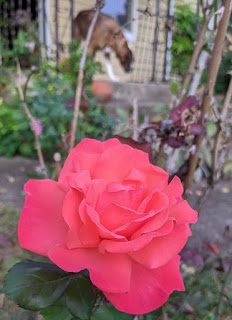