Okay, so I forgot to turn my alarm clock on for this morning.  Sleeping in is fun.  The dogs love it!  So do I.

Yesterday I got quite a lot accomplished.  My storm door is almost completely installed. There are just some minor bits and pieces needing to be screwed on.  I am pleased.  Since I found myself paying less and less attention to Greek, I loaded a Rosetta Stone German course into my writing laptop.  I've often felt I should learn the language since I am part Pennsylvania Dutch.

I decided to move my grandparents black, steel clock from my dresser down to my desk.  It doesn't always work, but it looks good there. 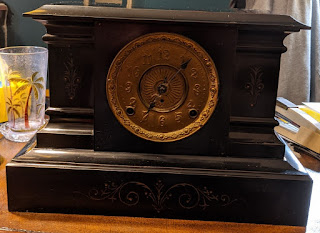 I also drove my ballot to the Post Office.  Early voting by mail is great. 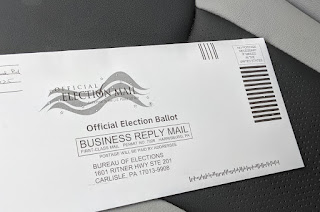 So, yesterday the Idiot Jerk said he was cutting off talks on a new stimulus package until after the election, saying "once I'm re-elected" a new package would be passed.  Susan Collins, who's going to be fired because she's a rat-bag Republican, went into panic mode, as did a number of other struggling, Republican senators.  In case you didn't know, this is the Idiot Jerk's version of Blackmail: vote for me and you get a package, vote for Biden and you'll have to wait.  Well, overnight he changed his mind and is now promising $1200 for every American.  Like that will ever happen while the Republicans hold the Senate.
Right now their focus is on getting their Cracker Jack Crazy Christian Handmaid into the Supreme Court.  They are so damn stupid.  America has told them to wait until the next president takes office.  Of course, there's very good possibility they will be a minority party by then, so their going to try and ram this nomination through.  They don't realize history is going to see their actions as nothing more than dirty desperation.
Oh, and Pennsylvania as veered seriously into Blue territory... and the Idiot Jerk is shrieking 'fake polls.'  Surprise, there are 800,000 more registered Democrats in this state then there are Republicans.  Damn!  Vote Blue so we can bring in the power washer and blow away their dirt.