Wow!  My work is here already, it seems like only 2 days ago that my weekend began... oh (sadly)… it did.  Now I get to work for 5 days before I get my 1, single day off.  Then I have to work another 5 days before I start a long, long weekend.  4 days.  They're my birthday present to me.

I don't think the store's going to be too busy over the next couple of days.  We're getting Zeta.

Here's a funny story.  I have this elderly customer, 84, who thinks he's smarter then everybody else.  He bought 2 sections of carpet (a remnant & a piece cut from a roll) to put into his basement.  Well, he and his son couldn't get them to lie correctly, he said there were lumps, so after some loud shrieking on his part we returned them.  He decided to let us install carpet.  On the day he paid for the installation, he wore his bright red MAGA hat, a mask with the Idiot Jerk's face, and a bold Idiot Jerk T-shirt.  I was very polite to him.  I didn't tell him only one of his installers was going to speak English (with an accent) and that the other was only going to speak Spanish.  I'm sure he will enjoy inviting a few immigrants into his house for a few hours.  Surprise!!

Yesterday I used up the last of my blueberries to bake a cake... with cream cheese icing. 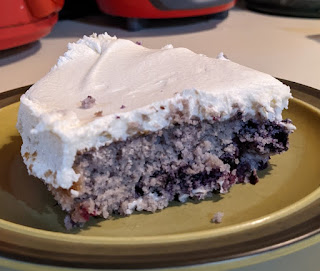 I saw where the Idiot Jerk has pulled his advertising from Florida, letting the RNC take up the slack.  This is not a good sign since he's being outspent by Biden and the Democrats.  His campaign is instead focusing on 4 rustbelt states, Pennsylvania being one of them.  That's why he was here 3 times yesterday.  His problem is that he needs to reach out beyond his base and that's not happening.  The problem here is that we don't start counting mail-in ballots until election day, and we have almost a million and a half that are going to need to be counted.  Right now they're expecting an accurate count by November 6.
On the really bright side, between 60 and 65 million people have already voted.  That is very close to the total number of people who voted in 2016.  Most of those votes are Democrat.  There are a lot of Democrats who are not voting by mail.  That method is still gaining in popularity.  Many will still head to the polls on November 3.  Surprise!