Well, we are under a blanket of steady rain.  We're not having anything torrential, mind you.  No downpours.  This is what we call a soaker, and the precipitation is going to be lasting for the next few days.  Son of a bitch.  No dog walk today, or probably tomorrow.  They are not happy.  Biggie's lying in on the bed making high pitched puppy dog sounds.  How such a big dog can produce such whimpers is beyond me.

No gym today because of the rain.  I got in a really good dumbbell workout yesterday.  I'll go for a nice ride instead.

Yesterday I sold a $4000 + flooring installation to a woman who couldn't remember exactly which color vinyl planks she was buying.  Just think about that for a few seconds.

Remember what I said about discounting many of the polls coming out right now?  Reuters / Ipsos came out with a poll of swing states this morning a 4% (+ /-) variance.  This means their guestimations can be either 4% higher or lower, which means their predictions can be off by as much as 8%.  A 4% variance is huge. One of the reasons for this discrepancy is that less than 75% of the people they talked to consider themselves to be 'likely voters.'

And I guess the Idiot Jerk is planning on making 11 campaign stops between now and Tuesday.  That's a sign of desperation.  Yesterday, in Arizona, he gave Martha McSally, a Republican in a really tough race, a little over a minute and a half stage time.  They know it doesn't look good for two of them to be on the same stage together.  Other guest speakers were given much lengthier speaking times, including Nigel Farage....  that's right, an Englishman... one of the fools trying to screw over the UK with Brexit.  Now ain't that amazing?  He just happened to be in Arizona yesterday.  I guess that means Brexit is running along smoothly... wrong.

By the way, I checked out Farage's Twitter feed and he Tweeted this:

Biden press conference just ended. No questions from the press allowed. He is now on the back foot on corruption allegations.

Of course, he got a lot of negative comments for that lie, one being that Brexit needs the Idiot Jerk to win - if he loses all of his debts are going to be called and he becomes useless. That sounds about right.

And finally, to lighten things up, here's a picture of Biggie and Lily I took yesterday morning as they waited to go for their walk. He is in the middle of an encouraging bark. 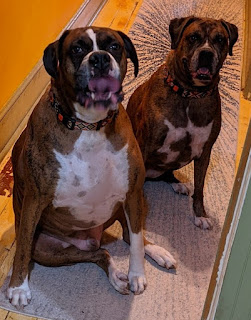 And I shouldn't have to tell you this, but Vote Blue. Let's watch the Idiot Jerk squirm when his creditors come knocking.