So, what will today bring?  The temps are supposed to be nice, not too humid, not too hot.  I have to work so it doesn't really faze me too much.  The sun is setting earlier, which is fine with me.  I like my daylight but evening is nice as well.

Another big  bag of dog food was delivered yesterday.  I like this so much better than having to cart them home from the grocery store.

I've decided that next year I'm not going to be putting my tomato plants in containers.  My harvest is small... literally.  My Big Boys are about 2 inches in diameter.  Not a good thing.  The only thing that really did well are my peppers, Jalapenos and Problamos.  They did quite well.  The basil I planted did very well, while the spearmint was very disappointing.

I didn't watch any of the convention last evening, but evidently Obama lanced the boil we know as the Idiot Jerk and he seethed all over Twitter, in all CAPS, no less.  While the Idiot Jerk's base loves to sweeten their breakfast cereal with his nightly scat droppings, most of us realized a long, long time ago this is what happens when you stick a pointy object into a festering sore.  I wonder who cleans the spray off of his TV?  That must be a really disgusting job.

And, of course, the Idiot Jerk's convention is approaching.  You know, it's always bad to go... 2nd, because his little shit show extravaganza is going to be compared with what's going on right now.  The Democrats are going full steam American, the Idiot Jerk?  My money says he's going to gaudy has hell, an unsocially distanced crowd in a ballroom, and a live speech that's going to run at least an hour and a half and will touch on any and every conspiracy theory that pops into his otherwise empty head.

Just think, before you know it we'll be hearing Melania Trump coo and bill her loving sentiments of the Idiot Jerk in the White House.  ... ...  Well, that's not exactly true.  I'd say most of us are waiting to see if Melanoma plagiarizes Michelle Obama one last time. 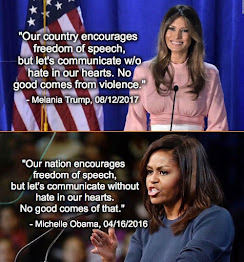 Probably not, even money says she's aiming for Jill Biden this year.