A Truth They Cannot Accept

Okay, so a friend and I installed a new / old back door yesterday.  First of all, I have to say that I'm glad it fits, this is often not the case when you own a 115 year old home.  Things don't fit since there are very few square or rectangular spaces.  All I need to do now is tack up the trim work.  The only problem we had was that it rained like hell.  Buckets and buckets and buckets... while we hung the new / old door.  Ah, well, these things happen sometimes.  I always say, "if that's the worst thing to happen to me in my life, then my life has been pretty damn good."

For those who don't know, the Idiot Jerk's new Reality show hit the airwaves last night.  He made 2 appearances.  Supposedly the GOP was going to go optimistic... okay, now stop laughing.  They are not optimistic about anything, which is why they went negative.  Ominous is the word many in the media are using.  Their full hatred of everything they can't control is on display.  For those who don't remember, or weren't born yet, Barry Goldwater went negative and he lost badly.  In case you're wondering, this show is only going to get worse as the Republicans desperately try to hold onto their base.

How disorganized are they?  Hell, they couldn't even getting enough of their ducks in a row to write a new party platform.  They're using the planks put together in 2016, the ones that say the current president is bad.  If they had read it, they'd have known this.  Of course, not having a platform means they are going to let the Idiot Jerk set their agenda should they once again win the White House.

Well, we know that's not going to happen.  The truth is there are very few sitting on the fence with this one.  If you think the Idiot Jerk and his flock of demons are angry now, just wait until they lose.  Their hatred will flow.  The take rejection very poorly.  It means that they have not been chosen, that they are wrong.  Ouch!  Only time will eliminate the polarization they depend upon for power.  We are the dam which keeps their rage from flooding America.  But keep in mind they are old, and getting older and America is changing in ways they cannot accept.   The last time I had breakfast with my brother I told him "there are more Blacks, and Hispanics, and Asians in this country then there are Republicans," and he looked down and away.  That is a truth they cannot accept.

And finally, as of yesterday, I can no longer wear a gaiter to work.  Masks are now required.  They're also going to check our temperature and we're going to have to fill out a survey each and every day we work.  I bought some new masks. 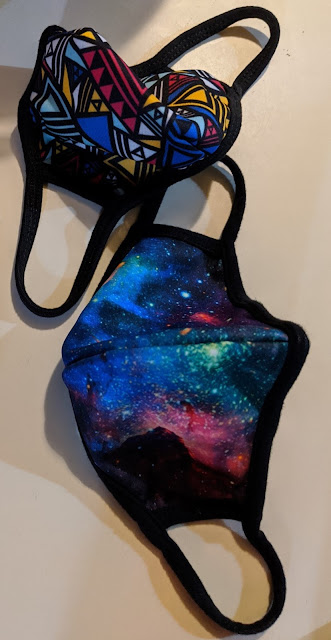 I don't know about you, but I'm kind of concerned some perky young thing in a snazzy bikini is running around topless.