Yesterday did not go as planned.

I did remove one of the Chinese algae eaters from my tank.  He was very aggressive towards the other fish, and don't doubt for a second he was responsible for the death of the gourami.  He's now in a large jar in the kitchen awaiting a decision on his fate.

The installation of the track lighting in my hallway went as planned.  It took me about 5 minutes to take down the original chandelier.  Wiring in simple.  I plotted out where my track was going to go (it hangs vertically from supports), drilled the holes, put in the supports.  The main fixture, however, came in pieces which needed to be assembled.  The metal covering plate was about half an inch thing so all the wiring had to be snug and secure before it could be screwed into place.  I ran the tracks, attached the lights, and turned on the switch.... Zippo.  Nothing.  So I took off the covering plate to check the wiring.  Fine.  I checked the connectors providing power for the track and realized they were not attached.  They had been pulled out of the supports that hold them in place.  There was no way it was going to provide power to the track.  Son of a bitch.  The power head was broken.  So I took the whole thing down, packed it up, and processed a return.  From start to finish, it took me about 4 hours.  It took me 5 minutes to remount the chandelier.  A new set of track lighting has been ordered.

So, I see the backlash is beginning in regards the the Idiot Jerk's attempt to steal the election by putting a Henchie in charge of the US Mail.  I understand that yesterday, speaking at his private golf club, he tried to put some distance between himself and his decision.  Neither he no the Republican Party understand they are a minority group trying to foist their Conservative policies upon a majority and this majority realizes his actions are those of a failed president knowing he's going to go down.  Voices are being raised and he doesn't like the sound of them.  They speak of his future and it is ugly.  And he's angry, because his ratings are going to hell in a hand-basket.

How angry is he?  He's planning campaign events during the DNC Convention.  Not to reach the American people, rather this is his desperate attempt to keep his base from splintering away.  It's almost funny, you know?  You can almost smell the stink of Republican fear. 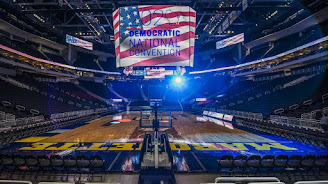 Raise your voices.  Let them all know they're in that Hand-basket  going to Hell.