Okay, so yesterday I added water and cleaned the fish tank.  The cleaning bit wasn't supposed to be difficult, just scoop out floating plant debris, and wouldn't you know it, the second I stuck the net in the water 3 fish swam directly into it.  In fact, they kept swimming into it.  So, it took a little longer than I had been expecting.  Dumb fish.

And, of course, there Kamala.  She's a big problem for the White Republican Party.  They were prepared to issue mini-attacks, but then there were prepared for just about any person Biden might choose.  Pence uttered some sort of nonsense about seeing her at the debate.  Duh.  She was chosen for a number of reasons, one being her aggressive, prosecutorial style she had already demonstrated in debates.  There will be a low, rumbling roar as white Evangelicals drop to their knees in prayer as she fillets his words and actions.  Mike, the android man, will lie, and she will call him on it.  As far as the White Republicans are concerned, this was the worst choice Biden could make.  Kamala's aggressive.  She will bullet point every one of their shit stained lies.

And that's not the only problem White Republicans face; there's a serious decline in Conservatives, or a least those who identify as Conservatives.  Remember Dave's axiom:  A popular president can move the country to either the left or the right, an unpopular president will always move it in the opposite direction.  The Idiot Jerk in the White House proves daily that Conservatives are selfish, self-centered, and ugly as hell.  No matter how desperate they are, they will not be able to force their will upon the American People.  They do not understand they are are feeding their own defeat.

Anyway, it's Wednesday.  I'm about halfway through my vacation and I've already finished most of the chores I wanted to get done.  One of the things I did was order a new waffle iron, actually it's a combo type thing, waffles, sandwiches, you name it.  That should be arriving tomorrow.  I can't wait.  Just as I can't wait to see if Biden's VP pick gives him a bit of a boost in the polls.  I wouldn't be surprised if he goes up another point or two. 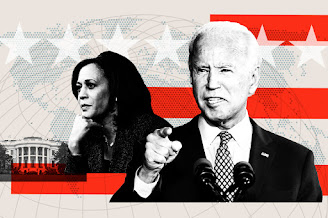