It's Thursday, my new waffle iron / sandwich maker arrives today.  I'm excited.  Probably more so for the sandwich side of things since I'll now be able to grill them.  Now I can be my own little Panera's at half the cost.

I did finally get my butt on my bike yesterday for a nice ride in Lombardy, the first half of Stage 1 of the ride.  Both stages come to around 50 miles.  Completing that would be an accomplishment.

There was a big spider in the kitchen sink this morning.  Since spiders do more good that bad, I used a broom to help him escape.  That's right.  I saved a spider.  Some of you will think this rather odd, but remember they eat a lot of bad insects... like mosquitoes.

I'm planning spending some of today stripping.  That's right.  Peeling away the nonessential.  While I won't be on a stage, I will be on a ladder.  And what am I going to be stripping away?  This ugly apple border in my hallway. 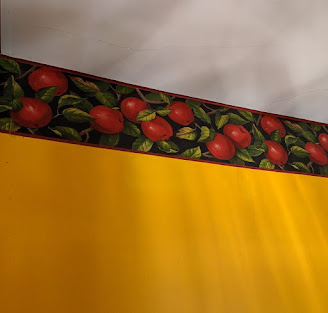 Why apples?  I wanted something red to go with the yellow walls of the hallway.  It was a mistake, of course.  Apples.  I don't like apples.  The only way I'll eat them is in a pie.  Yeah, I know, I'm a bit odd.
One thing that wasn't odd were the attacks on Harris by the racists on the Right.  You know who I'm talking about, the Idiot Jerk in the White House and Fox News.  I understand Tucker Carlson spent quite a bit of time making fun of her name....  This was coming from a man named Tucker, rhymes with Sucker, you know?  I understand these personal racist and sexist attacks are of great concern to the GOP.  Not because they are racist and sexist, rather his campaign has had how many months to prepare their attacks zeroing in on specific differences for each and everyone of the potential VP selection, and all they could muster in the end were petty sexist and racist attacks.  A thirteen year old child could come up with something better.  But then, this is what we have come to expect from the heart and soul of the Republican Party.  They are predictable.