Oh, my, Sunday has arrived.  What a week we have experienced.  There were a number of highs:  a co-worker has left the building... for good.  Our schedules for the next couple of weeks are chaotic, but the wasn't that much of a help when he was there.  The Democrats had their Convention.  That was really big.   But probably the biggest thing was how everything coalesced, and as a united majority we came out swinging.  And we landed punches.  And the world now knows we are America, not the crazies on the Right with their petty, tinfoil dictator wannabe.

By the way, did anybody listen to some of the recordings by the Idiot Jerk's sister?  I listened to the one where she said he has 'no principles.'  We've known that for quite some time.

The Republicans are having their convention this week.  Once again it is being called another attempt to reboot the Idiot Jerk's campaign.  This is what?  The third or fourth time it's been rebooted.  They're in reboot Hell.  Not surprisingly, he's scheduling himself to speak every night.  This shouldn't be a surprise.  To add to the entertainment value, I understand they've brought in 2 producers who worked on The Apprentice.  That's right, those poor suckers watching are going to get to watch a reboot of his reality show.  I wonder if he's going to say "you're fired."

And now for something completely different.  While working Thursday, I found a butterfly in aisle 9.  Not knowing how it got so far into the store, I took it outside.  Yesterday I found another one back by the restrooms.  The Kitchen Designer was kind enough to take pictures.  Here I am holding the little guy / girl. 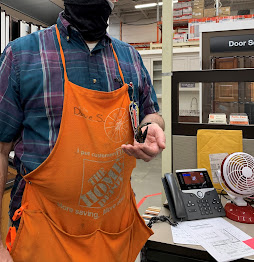 And here's a close-up. 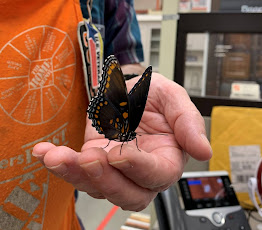 I took him out to our garden area.  It was the oddest feeling when he flew from my fingers to a small branch.  Last week was a very good week.