Were there any people of color on night 2 of the RNC?

Wednesday.  I had to get up 3 times during the night to let the dogs out.  You have to believe me, when Biggie has to go, Biggie has to go.  Crap!  I'm chalking it up to too much dinner.  I was thinking about the storm door that's going I'm going to be replacing at the back door.  I started pricing them out yesterday.  Now you have to remember, the last time storm door I purchased, about 26 years ago, cost around $65.  They've gotten pricier, by about 300%.  I hate spending money on the house because I know that I'm going to be selling when the dogs pass on to puppy heaven.

Night 2 of the RNC was evidently filled with a number of false and misleading statements.  Boy, are they keeping the fact-checkers employed which, oddly enough, proves that the Idiot Jerk has created jobs the pandemic hasn't taken away.  Here's what the NYT listed.  There was fact checking at the DNC Convention, but nothing like this.

And can we talk about all the family members talking up the Idiot Jerk, trying to make a moral degenerate look better.  What's the saying?  You can't make a silk purse out of a pig's ear?  Let's be honest here, they're not even working with that.

I understand Melanoma said she knows what life is like to be an immigrant.  I guess that's true if you happen to be a model / call girl looking for anyone with deep pockets.  She was supposed to smooth out the Idiot Jerk's rough edges... sorry, she forgot her sandblaster.

As I looked through the commentary this morning, one thing stood out, except for the pardoning of Jon Ponder, I don't think there was another Black face to be seen. 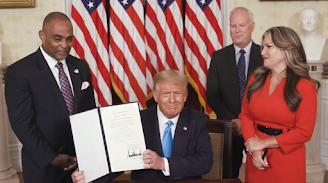