SOP for me is always the same, on the first day of Vaca I sleep late.  It's the only day, usually.  And, since this is Monday, I won't ride the bike.  Mondays are always my rest days.  That doesn't mean I'm going to laze around all day, just that I'm not going to  climb onto the bike saddle.

I sold a flooring job yesterday to a woman wearing an Idiot Jerk mask.  She said, "since I have to wear one I might as well wear one I believe in."  I said nothing.  I did nothing.  It's against company policy to smack sense into customers.  We are there to take their money, nothing else.  I suspect my silence said volumes.

On the way home from work yesterday I stopped at my neighborhood Giant and picked up a bottle of Oyster Bay, Sauvignon Blanc, it was on sale for $13.99.  It's from New Zealand, a country which has gotten a really good handle on this pandemic.  I also watched the last episodes of The Umbrella Academy.  I had seen somewhere that the show was cancelled, but then I've also seen it's one the most popular series on Netflix. 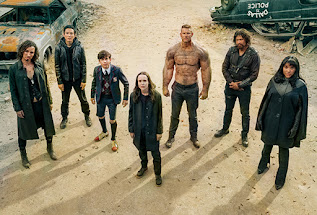 I was thinking about the approaching conventions, both Democratic and Republican, and the size of audience they will attract.  Biden has the Poll power.  He's going to have a running mate, a female, most likely black.  Everybody's going to want to hear what they have to say.  The Idiot Jerk?  Everybody knows exactly what he is.  The only ones watching him will be his base.  Can we talk about dismal ratings here?
And what about Pence?  He's been snapping back little verbal attacks against liberals, as one would expect from the the toad playing the Idiot Jerk's mini-me.  He has to do this because if the Idiot Jerk loses badly, it will interpreted as a sign that he did something very, very wrong.  Can we talk about SOP here?