While the rest of you are going back to work today, or returning to your home offices, I'm off.  Now, that doesn't mean I'm not going to be doing anything.  The back door is going to be replaced today.  In about a month, I'm going to be putting on a new screen door, too; the last one was broken by 180 lbs of dogs rushing to go out and chase a bunny.

I took a ride through San Remo yesterday and was disappointed to see my speed had dropped from 18.5 mph to 18.3 mph.  I need to focus more on my cycling.  I've been spending way too much time scanning news articles.  I blame it on the election.

And what about Kellyanne's daughter Claudia?  Seeking emancipation from her parents?  While she evidently gets along better with her father, she's none too pleased about his Republican beliefs.  However, she passionately hates the Idiot Jerk in the White House, which implies she has no respect what so ever for her mother.  Claudia has already warned people this is going to be a very public separation.

The Idiot Jerk's convention begins tonight.  Oh, my.  They released the list white speakers, most of whom are either family or bigots prominent in his administration.  Oh, yeah, those two gun toting, double knit mavens of the fashion industry are going to speak as well.  I'm betting they show up wearing black polyester and toting their guns onto the stage.  Think of a badly written skit for Saturday Night Live that will go over big with the white supremacists.

One of the most interesting aspects of this imbecilic affair  is that while the Republicans are celebrating the incompetence of their role model, two hurricanes are barreling towards the Gulf Coast.  Can we talk about unprecedented? 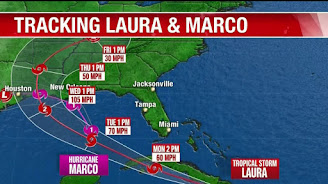 Both are expected to make landfall prior to the Idiot Jerk's speech on Thursday. Can we talk about Omens here?  This is a really bad sign from above.   I wonder, did he ever think Global Warming might interfere with his accepting the nomination for tinfoil dictator... oh, I mean incompetent president.  Does anyone know if he's gutted FEMA yet?  Do not doubt, these hurricanes will be blamed on the Democrats.