Holy Crap!  I have to go back to work today... but then I'm off tomorrow, so I'm sure I can endure 8 hours of retail.

The new track lighting is due to arrive today.  Tomorrow, the set that's broken get's dropped off at the UPS Store on the Carlisle Pike.  The credit will hit my account shortly after that.  The new lighting actually cost less... whoopee for me!

And, as Sixpence has already guessed, I did go out and buy a small tank for the bad fish. 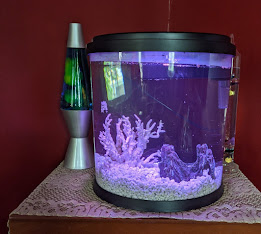 The little sucker is hanging on the side of the intake tube as I type.  Don't worry, some plants will be added, probably this Friday as I'm planning another jaunt down to That Fish Place.
And, of course, as anyone with half a brain could have predicted, the Idiot Jerk's decision to go Postal is getting all sorts of backlash.  I'm serious.  Half-wits have more common sense.  When he shits in his publicly shits in his pants, he does it big time.  While the Idiot Jerk hasn't come right out and said "I really don't know him, but I'm sure he's a nice guy,"of Louis DeJoy, the mega-donor henchie he put in charge of the postal service, he has begun to put some verbal distance between himself and DeJoy.  Now the Idiot Jerk is saying that all decisions made by DeJoy are his alone.
This attack on the Postal Service is just another act of desperation by a failed businessman, a fool who has 6 bankruptcies under his belt.  Yesterday, Mark Meadows admitted they have 'no proof what so ever' of voter fraud in regard to mail in ballots.  Ooops.   The reason the Idiot Jerk is pulling all of this stenchy shit is because when he loses, he's going to have 2 choices: either stay in the country and let them take him into custody and spend a lot of time in the 'bad tank' for 'bad fish,' or self-exile himself in a country friendly enough to let him live there. That's probably why he wants to meet with Putin before the election, to start the house-hunting process.