Well, it's Saturday and one of my Dwarf Fire Gouramis has died.  Yep, he's floating around the top of the tank.  This happens with fish, which is why when starting up a new tank never buy anything expensive.  I'd be flipping upset if it were a $50 discus floating belly up.

I was scheduled to work today, but... I am scheduled to be off tomorrow.  And then I work Monday and am scheduled off on Tuesday.  Anyway, today's going to be a personal day.  That will give me 7 days off in a row.  I can't remember when I've had this many sequential days off.

One of the things that's changing in my hallway is the elimination of the chandelier.  It's dusty as hell and the time has come to say goodbye. 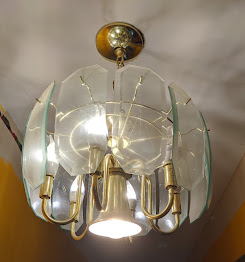 I installed it about 22 years ago.  When I moved into the house the lighting fixture looked like a fake copper kerosene lantern, without the globe which dimly lit the staircase.  The chandelier brightened things up, however the bulbs kept burning out.  If one of the little candelabra bulbs lasted 4 months I was lucky.  Believe me, I went through a lot of bulbs.  The LED bulbs lasted about a year, not a 5 or 6.  New track lighting is going up today.

And I got on the scale to see how much weight I had gained during this staycation of mine and was horrified to see it flashing at me... That much weight, I thought?   And then I realized it needed new batteries.

And what about the Idiot Jerk in the White House using the US Postal Service as a bargaining chip?  This man is so incredibly stupid.  His approval rating will drop lower than its current 38%.   Biden got a bump with his selection of Harris, even among Progressives who realize this election is about driving a stake into the heart of the Republican Party.  There are so many problems with the Idiot Jerk and his party.  American Voters are fed up with this hate message they've been regurgitating for years.  Since he can't offer anything of substance, he's looking for a new nickname for Biden...  Just think about that for a second without questioning the juvenile absurdity of that idea.  Biden is going to give his acceptance speech and American will tune in to listen.  The Idiot Jerk will give his acceptance speech and his base will tune in, and then he's going to shit a brick when he sees how bad his ratings are and then... maybe, he might realize that a major majority of Americans are sharpening their stakes.