Weighing in on things

Oh my gosh!  It's Sunday!  and I'm off.  That's right, I'm not scheduled.  This is the first of 3 days in a row!  It's like a mini-vacation, you know?  And just think, I already have a load of laundry in the washer!
I went to see "It, Chapter 2) last evening.  It's good.  However, I have to say I thought the first part was better. The first film was based solely on the 'Losers' as children.  Chapter 2 is more consistent with the way the novel was written:  the children's story and the adult's story are intertwined.  In Chapter 2 both stories are juxtaposed against each other with each adult having a flashback to one specific childhood memory which creates lapses in the tension.  And then there is the Ending.  King tends to have a problem with his endings.  They don't always achieve the climax you are expecting.  A good screenwriter can fix this.  With that being said, Chapter 2's ending is vastly improved over the book, especially when you consider what they were working with.  Acting wise?  The cast does a very good job, though Bill Hader is definitely the standout performance.  His line "oh, there he is" made me laugh loudly.

A couple days back Sixpence blogged about supplements, how there seems to be a lot of erectile dysfunction out there.  I'm not a big believer in supplements since for the most parts there's not a lot of credible evidence on their reliability.  I do, however take two, and not because of any type of dysfunction, rather my reasoning is protein based.  Usually I will drink an 8 oz concoction of whey about fifteen minutes before I ride the bike.  Supposedly the extra protein in my blood will help make the ride easier... I don't really know if it does or not.  Whey is a fast acting protein which goes through your system fast.  For all I know, a healthy bowl of oatmeal might do the same thing... except that would hang around in your stomach for a bit, and that's something I don't want.  Any whey (haha) these are the two that I take: 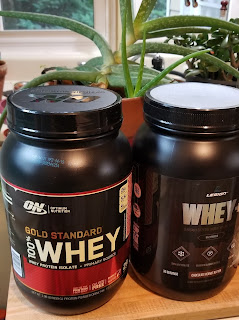 The one on the right, Legion, is expensive but is said to come from grass fed Irish cows... the ones they have in Ireland...  ....  Don't really know about that.  At some time in the future I will most likely settle on one brand, which I'm thinking is going to be the "Gold Standard."  Over all that one has the best ratings.
Posted by Dave R at 6:57 AM