Well, here it is Thursday and my ass is running late.  Why you ask?
Well, I got home yesterday and my GoPro was waiting for me.  I unpacked it, put in the sim card and battery, and turned it on.  It beeped several times.  I could see the top of my desk on the view screen... and then it turned off.  I looked at the instructions and one of the most prominent things on Page 1 was 'charge the battery.'  So I plugged in the charger.  Fully charged, I tried turning on the camera.  Nothing happened.  I thought, maybe I was wrong and it wasn't fully charged, so I plugged it in again.  And then I turned it on.  It worked well.  And I thought it still needed to be charged a little more.  Wrong.  There's a problem.  It only works when it's plugged in.  The minute I take it off the charger the camera turns off.  Shit.
I contacted Amazon this morning.  Turns out I purchased the camera from a 3rd party vendor, not GoPro.  There's nothing wrong with that... I've bought quite a number of things through 3rd parties.  But sometimes 3rd parties don't always sell you precisely what they advertise, or, if you remember my desk delivery issues, try to provide services on the cheap.  I have no problem dealing with these vendors.  I was given the option to return the camera.  So, this afternoon on my way home from work, I'm stopping by the UPS store.
Funny thing though, I had bought a Hero 5 Black GoPro, which is one of their older models.  This morning, go to the GoPro website, I saw they had a Hero 7 Silver, their newest model for only $20 more than what I had originally paid.  It's ordered and should be here in about 2 days.  The credit for my refund will just about cover the charge.  This is what I should have done in the first place.
In political news:  I saw where Baby's calling for a Unity Coalition government in Israel.  The powerful liberals want that too, but you can bet once it's formed Baby's going to find himself sitting in the room down the hall when ever they meet.  And soon, his corruption trial is going to begin.
And I know people don't understand that when I sit down and write magic happens.  But now I have proof.  Yesterday, as I was sitting in the living room with the morning sun shining in through the front door, I could see it.  I took a pictures.  Now you can see the magic, too. 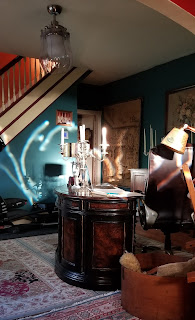