I was all set to run around the house this morning shouting "It's Saturday!  It's Saturday!  No work!" but then I realized I was a day early.  That will happen tomorrow.
Ubisoft emailed me my 'key' for Ghost Recon - Breakpoint last evening so I downloaded the game while I slept.  Nice. This is the Open Beta version, which is more of a sales promotional thing rather the closed Beta version in which a select group of players actually try and break the game. I understand that can be a lot of fun.  But, as an open Beta, it shuts down on 9/9 and may not be available to play again until it's official release.  One of the other games I ordered Greedfall, is due to be delivered on Wednesday.
I'm looking for a new cactus.  I've had a Barrel Cactus for 9 years and last Monday, while I was watering my plants... I over watered it.  This was one those... what in hell was I thinking about moments.  The next morning I emptied all the water sitting filling the base... but it was too late.  It's a cactus, after all.  The entire barrel, which was almost 7 inches high, has turned brown and collapsed. 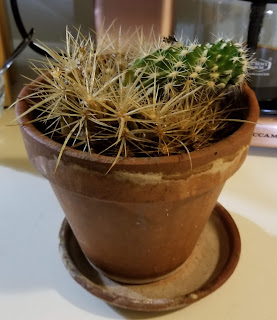 I stuck it outside for a couple of days hoping the heat of the sun might revive the little guy... nothing.  He just keeps collapsing in upon himself.
And I thought it interesting that even Boris Johnson's brother has added his own little knife to those already in Boris' back...  The sad truth is that Boris deserves to be pricked even more.
Oh, and I saw... hold onto your hats... that the Idiot Jerk's spawn is planning on running for the White House in 2024.  This group of breeders is totally out of touch with the real world.  Someone should tell them that Wisconsin, a state with a lot of family owned farms, is leading the country in farm bankruptcies.  And yes, these are some of the people who voted to Make America Great Again.  45 family owned farms filed for bankruptcy last year.  That's not a good thing.  You see, they didn't realized that the cheese the Idiot Jerk prefers most on his Big Macs is processed.  Now, how is that for a burr in their sides?
Posted by Dave R at 6:11 AM